Most Recent | About | CyberLink Homepage 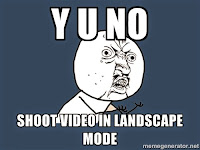 I probably don’t need to tell you not to shoot videos with your smartphone held vertically. Since you are reading this blog, you are obviously smart and sophisticated. You probably are also one on the six million people who have watched this public service announcement: Say No to Vertical Videos.

But honestly, there are times when it is more convenient or useful to shoot vertical (sometimes called portrait) video. For example, a family member might be doing something absolutely hilarious, and you want to capture it on video. But if they see you holding your phone horizontally, they are going to know that you are filming them, and they will stop doing the hilarious thing. The moment is lost.

On the tech side of things, some videos are intentionally shot vertically; sometimes because the subjects that are taller than they are wide, and increasing the distance between camera and subject to capture it all horizontally would mean losing resolution detail. An even more compelling reason for vertical video is that some projects are designed specifically to be viewed on tablet computers, smartphones, or E-readers, where the vertical orientation is arguably the more natural way to watch video.

STEP 1: So here’s a suggestion for using PowerDirector to make vertical video presentable. (NOTE: PowerDirector will probably auto-rotate your vertical video, as it can read the file's EXIF data and act accordingly. If your video is already rotated correctly, skip to STEP 2). Select the video in the timeline, so that you can see the blue crosshairs on the image in the Preview Window. Click on the crosshairs and drag to rotate the image. Then click on one of the middle white buttons on the periphery to resize the image (since after rotation it will be too tall).

Now you’ve got the video oriented correctly, with large black strips on either side. Many people will just share or upload the video in this form, and wait for the inevitable derisive comments about holding the smartphone the wrong way.
STEP 2: But we can improve the video with just a few easy steps in PowerDirector. Just add the same clip to the timeline two more times, placed so that all three clips start at the same time. Re-position the two added clips so that they fill the black spaces on both sides. Re-size the outside clips so that they are larger than the original center clip.

In the Effect Room, click on “Style” and find “Gaussian Blur.” Drag it onto both outer clips. Adjust the degree of the Gaussian Blur so that the outer clips retain the general color and motion of the center clip, without showing too much detail.

Without the conspicuous black spaces to either side, the video is now much easier on the viewer’s eye. The whole process takes a very short time, and the improvement is huge. You can see the full video from the above project here.

If you want to give this a shot but you do not own PowerDirector, you can download the 30-day trial version here. If you have any questions about this, ask me in the comments below.