Most Recent | About | CyberLink Homepage

No, I'm not talking about recycling and conserving energy, though you should certainly do those things too. No, I'm talk about using green screen compositing with PowerDirector to do really cool things.

Technically, it's not green screen, it's chroma key compositing, also known as chroma keying. You can use it to layer images or video streams, where one color in the top layer is set to be transparent. The transparent color is usually either green or blue, because green and blue are the colors farthest away from human skin tones. The most ubiquitous example of this technique that most people are familiar with is the TV meteorologist. He or she stands on front of a blank screen, and software makes the color of that screen transparent. The presenter’s image is then easily overlaid on a weather map or other digital display.


In the meteorologist example, the subject is superimposed onto a virtual background. This is essentially the same technique used in movies, that will let us see a superhero fly over a city – two video images are combined into a single clip. But you can also chroma key the other way, and by this I mean superimposing many new subjects into your existing background footage. By searching online, you can easily find thousands of free green screen video clips, encompassing characters, vehicles, effects, and just about any object you can think of*. Download the green screen clips you like, and import them into PowerDirector for integration with your own shots.

Since PowerDirector can combine up to 100 separate video tracks, the possibilities to add interesting, cool, and downright hilarious elements to your video are almost endless. Let’s look at an example:

Here is a time lapse clip of a peaceful city scene. Looks a bit dull, doesn’t it? Let’s spice it up. 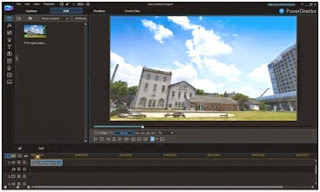 We search for and find green screen video clips of:


We add them on the timeline on top of the city clip, and then use chroma key to make green the transparent color.

And voila! The illegally dancing stormtrooper is about to be arrested as a dragon approaches the city.

Remember, once you have chroma keyed the subject footage you want to use, PowerDirector lets you modify it in hundreds of ways. You can change the subject’s size, orientation, colors, and you can even set motion paths so that everything moves exactly where and when you want it to.
Posted by Chaon